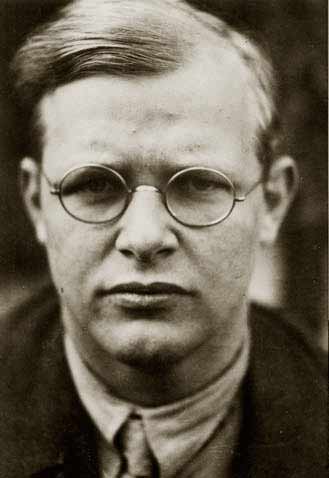 We live in a world where God is no longer central to our culture.  We live in a world where angry voices sometimes make being a voice of peace much harder.  History shows that others have faced these challenges before. Their experience can help us to understand the role our faith has in a society that has gone far away from God.  This is the story of one of the great theologians of our time who faced just such challenges.

Dietrich Bonhoeffer was born on the 4th February 1906 in Breslau Germany into a middle-class family. The First World War saw the Bonhoeffers lose one son and another wounded. They suffered the privations of the Allied blockade and the treaty of Versailles for which Dietrich never forgave the allies. Dietrich was given the best education and it was a great surprise to his family when he chose to study theology.

As Hitler’s power and persecution of the Jewish people grew in 1933, he spoke out on their behalf calling them “Worthy Citizens”.   This open opposition of the tide of hatred robbed him of a blossoming career.

It was perhaps unsurprising then that Dietrich saw Christianity as a faith that has a cost to its followers. In 1937 he wrote “The Cost of Discipleship” which spoke of, Cheap and Costly Grace. “Grace” can be defined as unconditional love toward a person who has done nothing to deserve it”. “Cheap Grace” essentially is grace where we know we are forgiven and carry on how we like, and it’s the grace without the following, grace without the discipleship. However, then he talks about the flip side, costly grace.


He then says “Costly Grace” may call us to do things we may feel unworthy of or unprepared at the time we are called. Our job is to follow the call.


One thing that makes this journey easier is that with Christ as our mediator we become one humanity.  This binding of us through Christ makes intercessionary prayer the most powerful thing we can do. The Christ that mediates and acts in us, exists and acts in our brothers and sisters.

“However loving and sympathetic we try to be, however, sound our psychology, however frank and open our behaviour, we cannot penetrate the incognito of the other man, for there are no direct relationships, not even between soul and soul.

Christ stands between us, and we can only get into touch with our neighbours through him. That is why intercession is the most promising way to reach our neighbours, and corporate prayer offered in the name of Christ, the purest form of fellowship” (Take a look at Ephesians 2 and see how Paul explores the same theme of “One Humanity” mediated by Christ).

His explanation of the Good Samaritan in Luke 10 shows that this fellowship extends beyond the tribe we belong too.  The first mistake Bonhoeffer thinks the lawyer made was to ask, ‘who is my neighbour?’   I think you can hear that question being asked today in our time, and of course, Bonhoeffer could hear that question in his time. Bonhoeffer’s response to this question is as follows.

We have literally no time to sit down and ask ourselves whether so-and-so is our neighbour or not. We must get into action and obey – we must behave like a neighbour to him. But perhaps this shocks you. Perhaps you still think you ought to think out beforehand and know what you ought to do. To that, there is only one answer. You can only know and think about it by actually doing it. You can only learn what obedience is by obeying. It is no use asking questions; for it is only through obedience that you come to learn the truth.

In simple terms, Bonhoeffer says that discipleship should always cost us something and change the way we behave.  That Christ is in all humanity, and that means we share in the suffering of Christ and of our fellow humans. That all of our fellow humans have Christ in them and as a result become our neighbours. That like Peter as he left his nets, this call and response should be immediate and without question, as should our love for our neighbour.


As Hitler’s power grew, he created “Reich Churches” which removed bibles and replaced them with Mein Kampf. In response to this Bonhoeffer helped create the illegal “Confessing Church” and became the leader of a seminary in Finkenwaldein.  Here he wrote “Life Together” that still influences Christian communities on what it means to live a life before God.

The major themes of this book are that Christian communities have been built to become a dwelling in which God lives.  Various ministries should be present in these communities, Meekness, Listening, and Helpfulness, Bearing one another’s Burden, Proclamation and Confession.

At one point he escaped to America but felt he had to come back because he felt that he could not lead the church in Germany after the war if he had not tried to do so during it.   He was at arrested on a minor charge in 1943 and taken to Tagel Prison.   While in prison it became clear he was involved in the failed plot to assassinate Hitler. His correspondence became the posthumous “Letters and Papers from Prison”.


“The human being is called upon to share in God’s suffering at the hands of a godless world. Thus, we must really live in that godless world and not try to cover up or transfigure its godlessness somehow with religion.”

The conclusion he reached from this is that

“It is not a religious act that makes someone a Christian, but rather sharing in God’s suffering in the worldly life. That is “μετάνοια,” not thinking first of one’s own needs, questions, sins, and fears but allowing oneself to be pulled into walking the path that Jesus walks, into the messianic event, in which Isaiah. 53 is now being fulfilled!”

This is the relevance of Christ in a Godless world for Bonhoeffer. Humanity is unified by the Christ in all of us. “Religious” rites do not make us right with God. Our Lord wants our discipleship, our following. Our Lord suffers because his children suffer, and as we have the suffering Christ in us, we share his suffering.  The only resolution, therefore, is to love our neighbour and to know that everyone is our neighbour. We must do this openly and, in the world, not cloistered away, letting the world see, this is why we are as we are.

If all that has left, you thinking Bonhoeffer was some sort of “Superman” that we can neither aspire to nor learn from?  My last words are a poem he wrote shortly before his execution on the 9 April 1945.

They often tell me

I would step from my cell’s confinement

Who am I?
They often tell me

I would talk to my warders

freely and friendly and clearly,

as though it were mine to command.

Who am I?
They also tell me

I would bear the days of misfortune

Am I then really all that which other men tell of?

Or am I only what I know of myself?

restless and longing and sick, like a bird in a cage,

struggling for breath, as though hands were

yearning for colours, for flowers, for the voices of birds,

thirsting for words of kindness, for neighbourliness,

trembling in expectation of great events,

powerlessly trembling for friends at an infinite distance,

weary and empty at praying, at thinking, at making,

faint, and ready to say farewell to it all?

Who am I? This or the other?

Am I one person today, and tomorrow another?

Am I both at once? A hypocrite before others,

and before myself a contemptibly woebegone weakling?

Or is something within me still like a beaten army,

Who am I? They mock me, these lonely questions of mine.

Whoever I am, Thou knowest, O God, I am Thine.

We only have Bonhoeffer’s early work as he was murdered at age 39.

I hope you learn to love him as much as I do.