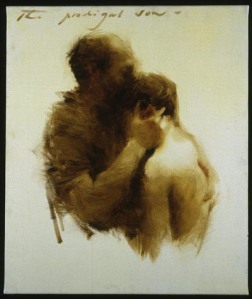 Some of the stories of the bible are SO familiar they start to lose relevance in our lives.  We kind of know them, but we never absorb them.

One of my favorites is the return of the prodigal son. The themes of this parable, recur over and over in my life..

The son leaves his father because as with so much in life we think the grass is greener somewhere else, more interesting, has better prospects. So we go looking, or we get angry and we slam the door on the way out, or we think we deserve more etcetera etcetera

This story when told to our children  is often told as one of forgiveness, and we relate it to our fathers. It is of course about that but also much much more.

It about our father in heaven, and how he relates to us.

You hear so many christian journeys like this we wander off, look at so many things doubt, anger, worldly distractions, and (at least for me) looking back stupidity take us away.

This for me is lesson number one in this story…

For me the thing is, he doesn’t stop you, he gives you what you need for the journey, more than just letting you go he makes sure you get whatever you feel your due as you leave?

As the story goes the son was quite direct and said…

‘Father, give me my share of the estate.’ So he divided his property between them.

This is one of the things we often forget about Christianity and our god. We have free will, we can injure ourselves and he will let us go. We can do wrong and he wont stop us. Often I see people blame god for this, when people do bad things, or bad things happen.  Why didn’t god stop that?

God let’s his children go, we are not in prison, we aren’t toys, we are more than his playthings. The gate is open, the jail doesnt exist, the walls were never built, we never got put in a play pen.

Lesson Number two, ask and it shall be given.

Then the next thing he shows us is that we have to make the first step, and come back in the right way. The son realizes his mistake, he takes action.

“I am no longer worthy to be called your son; make me like one of your hired servants.’ 20 So he got up and went to his father.”

He went, he took action and he realized his error.

That is also key I think to our relationship.  So often I struggle with things and it isn’t till I pray that things start to turn.  My favorite hymn at the moment is “what a friend we have in Jesus”.

The lines in the first verse are very true…

Oh, what peace we often forfeit,
Oh, what needless pain we bear,
All because we do not carry
Everything to God in prayer.

God waits in the hymn and in the parable for US to make the first step.  For us to reach out and ask him.

This happened to me recently I struggled and worried through some testing times. It wasn’t until I said “help me” that things changed?

Also on the day I converted to Christianity, I asked him to come into my life, and I called myself a sinner.

The good news is that no matter how far we stray, or how far we let ourselves drift from his love and care we only have to make a tiny small step back to him.

The story says it, you walk towards him, he RUNS towards you.

“But while he was still a long way off, his father saw him and was filled with compassion for him; he RAN to his son, threw his arms around him and kissed him.

Kissed him? not a cold “I’m glad your back” but unrestrained love, we don’t kiss people we haven’t quite forgiven yet, we may hold on to pride, or self respect, or make the returning one feel the weight of his sin, because he deserves it.

God doesn’t do that.

When we come back to him, god throws his arms around you, and kisses you, that is so much  more than forgiveness.
Its Love, that continued while you were away, that was untarnished by your misdemeanors, wandering around aimlessly searching for what you already have,for the anger to subside,  your wrongdoing to your father to stop.

I think some people also think that god offered his errant son a “clean slate”.

This was not  a clean slate, that infers that he stopped loving you and then started again, that’s why he kisses him This wasn’t a “restart” of love, a renewal of a relationship.

He never stopped loving you, and he never stops.
But always, as with the prodigal son, you have to make the first step.

So whatever is bothering you, whatever is broken in your relationship with god, whatever your angry about, whatever doubts you have. I think this simple parable shows the way back, to the love that never stopped.

Open your heart, and ask. Take the small step, so he can run to you.